A PROUD HISTORY, AND MAKING MORE EVERY DAY.

A TIMELINE OF HUCKINS YACHTS

Frank Huckins designs a balanced outboard rudder used on WWII PT boats and all postwar boats through the 1970s.

Huckins Yacht Corporation moves to a new yard, its current location on the Ortega River.

Huckins begins sheathing mahogany hulls with fiberglass, later applying resin to the interiors and creating what are now known as "cold-molded" hulls.

Huckins Yacht Corporation builds the largest sportfishing yacht in the U.S. at the time — an 80-footer.

Huckins unveils the largest motor yacht in the U.S. with a fiberglass-cored hull (cored with the closed-cell PVC extrusion AIREX®).

Huckins builds the largest outboard cruising yacht of its time, a 50' Sport Yacht powered with four outboard engines and capable of 38 mph.

Huckins Yacht Corporation celebrates its 85th anniversary. The company remains one of the oldest family-owned custom yacht builders in the United States.

Delivery of WOMBAT a 45' Sportfisherman. 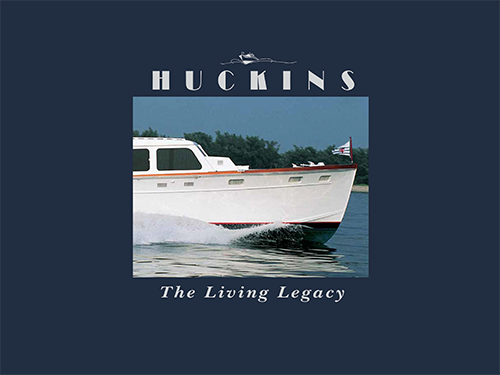 Get Your Digital Copy Of Huckins The Living Legacy

Learn about the history of Frank Pembroke Huckins and how he invented one of the first true planing hulls — the Huckins Quadraconic hull. Also hear seventy years of testimonials from the participants.